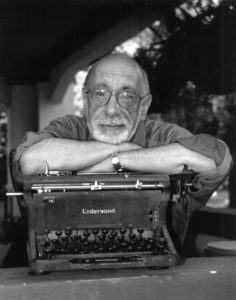 We were fortunate to spend a whole afternoon and evening with poet/essayist Albert Goldbarth a few months ago. It was a great day with passionate talk across a wide spectrum of subjects. We decided to share his views on a variety of topics, excerpted from the recording of a long, informal conversation. We hope you enjoy his insights as much as we enjoyed the time we spent with him. The same day, he came to our studio (aka the office) and recorded the work he has published in december from 1971 to now. You can listen to him read his poems here.

On living in Wichita: Wichita is a blue-collar town. In the old days, it was an important city on the cattle drive; it used to be a rip-roaring, shoot-’em-up, bordello kind of town. Eventually, the cattle began going around Wichita, and Kansas City picked up all the cattle-drive business, and Wichita started to die until a stroke of good luck – World War II – came along, and Beechcraft and Boeing made a new economic life for the city. They’re still major players on the Wichita economic scene. Wichita State University is the largest university in the largest city in the state, and Friends University and Newman University are located there as well, but it doesn’t have the feel of a college town. Still books can be bought (I live near the locally owned Watermark Books) and microbreweries serve up their product, and a writer’s life can be made here. At least, mine can.

On shopping: I understand the politics of commerce. I could happily browse at Walmart at 2 in the morning and immerse myself in the real America.

On reading: I read all sorts of nonfiction, from physics to celebrity bios. I do read genre fiction, a lot of science fiction, mysteries, but literary fiction, too. I’m rereading some Bellow and George Eliot right now. I pick up magazines all the time, an occasional issue of Discover, National Geographic, anything from Biblical Archeology to Hustler, if it calls out to me. Also an occasional Walt Disney’s Comics & Stories. Nothing wrong with the Donald Duck and Uncle Scrooge stories. I just joined the Carl Barks Fan Club – he’s a true American popular culture genius, and he created Uncle Scrooge.

On poetry readings: Readings are not a good index of the quality of anybody’s work. Why should a writer have to be a good reader of his or her own work? Some people simply aren’t. I think I give a good reading, but the human voice is a very limited medium. Words done well on the literary page are larger than anything the human voice can give utterance to. Plenty of poems almost by definition can’t be read well out loud for any number of reasons. And, of course, inferior writing projected by a good performer can be very misleading. Literary talent and theatrical talent are two different things.

On a favorite assignment: A number of years ago, as Halloween was approaching, I told my undergraduate class to dress up as a poet or a poem for Halloween. Two people in unison dressed up as Wordsworth’s Daffodils poem (I Wandered Lonely As A Cloud), one guy was a daffodil and a woman was a cloud with a little sun breaking overhead. And one woman dressed up as Sylvia Plath, by which I mean she brought into the room an entire, full-size, three-dimensional cardboard stove she had made, with foil burners and actual dials that could turn and a door that could open. When I came into the room, there was a complete tableau. She was on the floor with her head in the oven, one shoe off, one shoe on, a vial of pills on the floor, carefully spilled out, with a prescription label on it for an anti-depressant popular in Plath’s time. It was extraordinary. Did it help her grade? Hey, I’m only human.

On collecting: I could talk in a loving manner about the kinds of things I like to collect – the vintage outer space toys, the manual typewriters, and more. I suppose you could psychoanalyze some writers by their collections – all the more reason for me to clam up now.

On book recommendations: A few weeks ago I recommended to a few friends a new book by Sven Birkerts called Changing the Subject. It’s a soulfully deep, richly written book that is not only a very eloquent questioning of where technology is taking us and of how internet reading affects our lives, but besides being just cautionary, it is a lovely paean to the life of reading traditionally – slowly, deeply, undistractedly, and understanding the pleasures of narrative.

On interviews: I’ve rarely read an interview that didn’t make me cringe. Whether I live in Kansas or Paris, whether I collect ancient Mesopotamian cylinder seals or old Pepsi bottles…none of it matters, including what I’ve said here. The poem is the poem, the essay is the essay, and, to slightly paraphrase Keats (who never gave an interview in his life), “That’s all you need to know.” 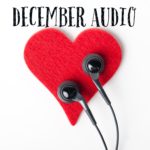